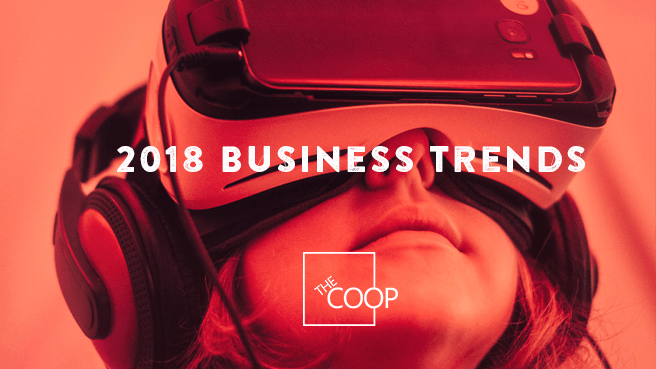 Yep… you are in real danger of being left in the dark ages.  Do you gasp at the idea of a New Year a New You?   It’s easy to fall into a routine that has taken time to perfect, but business trends are accelerating and it seems technology is accelerating even faster.

Which trends do you keep up with? Are you relying on something that no longer works? How will these trends affect your career? Which ones will move your career forward? If you’re conscientious or ambitious, these questions are a struggle to answer.  And these answers are different for everyone.

According to Workzone, these are the 8 new business trends to follow.

1. The arrival of Augmented Intelligence

Not just artificial intelligence, but augmented intelligence, man + machine, is here. The use of AI to augment our performance is being implemented across a variety of industries. These changes are subtle, but they’re taking hold as the pressure to over perform at work grows.

• Automotive: Assembly line workers are relying on AI powered software and robotics to keep up with the overwhelming demand. These changes have made advanced cars more affordable to the average consumer.
• Airlines: Let’s say your flight is going to be delayed. IBM’s Watson notifies flight attendants automatically. Watson lets them know which passengers are going to miss their connecting flight. Watson then provides attendants with instructions. Where to go when they land, alternate connecting flights and more.
• Marketing: Amazon is using AI to augment worker productivity. One area that’s received a significant amount of attention is marketing. Amazon uses AI to regulate dynamic pricing. They use it to change product descriptions. To alter product rankings based on a variety of factors. Amazon uses your spending habits to determine the price you’ll pay. Loyal customers pay more, infrequent or irregular customers pay less.
• Warehousing: Robotics company Symbiotic is working to augment and automate the grocery distribution business. Blue chip brands like Amazon and Lego have already used AI and robotics to augment or, in some cases, completely automate their warehouses.

2.  Artificial Intelligence moves to the mainstream

Artificial intelligence has been democratized. Microsoft announced that AI is already present in the half a billion devices running Windows 10. Google has released TensorFlow. Berkeley AI research released Caffe and Apache released Apache MXNEt. Amazon created an AI friendly platform for developers to work with a variety of AI specific frameworks and services.

What does this tell us about artificial intelligence?

It’s quickly becoming a mainstream obsession. Here’s what’s interesting about these changes. These large companies aren’t simply creating a few one-off products with AI. They’re quietly integrating it into every part of their organization, with both internal and external applications.

As it turns out, this is good news, for now.

AI is still in its infancy so job loss for most people is negligible. And it’s likely to stay that way for at least the next decade. That’s good news for most people because it means they won’t be replaced, at least until…

Budweiser has just made history. They’ve just delivered beer. Big deal. Isn’t that something they do every day? Absolutely. Their drivers make deliveries to stores on a daily basis. So what makes this particular delivery special or noteworthy?

Otto and Budweiser teamed up to make the world’s first autonomous truck delivery.

The truck, outfitted with $30,000 dollars of hardware and software, drove 120 miles from Fort Collins to Colorado Springs. This is a game changer for the trucking industry, which hauls 70 percent of America’s freight.

Automation’s rise to prominence is fueled by massive spending and the rapid growth in specific areas.

4. The end of quality, the rise of the experience economy

Let me tell you about the Museum of Ice Cream. No, it’s not about the history of ice cream. Or for you to learn how it’s made. It’s to let people play. Specifically to let adults throw sprinkles on one another. And there are lines around the block.

Customers crave experiences. That’s why the Museum of Ice Cream exists. Not to tell you the history of ice cream, but to experience what it’s like to playfully live like ice cream? Or something like that.

Customers want to experience an emotional connection. They’re looking for organizations with shared values. And more importantly, they want your organization to speak to their reason and their emotions.

They want a story.

Research shows emotion drives attention. We pay a lot of attention to the things we find threatening and, to a lesser extent, rewarding. Today customers place a premium on experiences. What they’re really looking for though, is meaning.

Storytelling, events and experiences. These are the mechanisms they use to find meaning.

5. The brick and mortar apocalypse

What do Macy’s, Sears, J.C. Penny and RadioShack have in common? They’re all closing more than 100 stores. Sports Authority has closed their doors for good. Toys”R”Us has filed bankruptcy. More than 40 major brick and mortar brands have shut down, closed a large number of retail locations, or gone out of business completely.

Our economy is growing. Consumer confidence is high, unemployment is at a historic low. Bricks and mortar retailers should be growing. Retailers instead are dying out.

Massive retail debt. The rise of Amazon and online shopping. The shrinking middle class and the experience economy. These are all contributors to the retail apocalypse. And, according to Bloomberg, it’s only going to get worse.

These trends are accelerating as businesses struggle to adapt to the new paradigm.

6. Values over the bottom line

It’s November 2016. REI has made a dangerous decision.

They’ve decided to shut their business down on the busiest day of the year, on Black Friday. They shut their distribution centers, retail locations and headquarters down completely. They paid their employees to take the day off and spend it outside.

They called it #OptOutside.

More than 150 businesses followed their lead, closing their doors on Black Friday. Hundreds of State Parks opened their gates to the public, for free.

REI spawned a movement. So they’re doing it again this year.

Is REI an anomaly?

Black Friday is Patagonia’s biggest day of the year. Last year they expected to bring in $2 million via their website and retail locations. They decided to make a stand as well.

Patagonia promised to give 100 percent of their Black Friday sales to charity.

They made their announcement then almost immediately they were flooded with sales. Patagonia brought in $10 million by the end of the day. Five times more than they expected. As promised, they donated all the money to grassroots environmental groups.

It’s a trend that will only continue to grow.

The Meaningful Brands study, conducted by the Havas Group, interviewed 300,000 people worldwide. They analyzed 1,500 brands in 15 industries, across 33 countries.

Here’s what they found.

• Values are a significant driver of business
• People wouldn’t care if 74 percent of the brands they use just disappeared
• 84 percent of consumers expect brands to provide content
• 60 percent of content produced by brands is declared as poor, irrelevant or failing to deliver
• 75 percent of us expect brands to make more of a contribution to our well being and quality of life, yet only 40 percent believe brands are doing so
• Less than 27 percent of the brands we use notably improve our quality of life and well being.
• Meaningful brands have outperformed the stock market by a staggering 206 percent over a ten-year period between 2006 and 2016
• Meaningfulness in brand marketing can increase share of wallet by up to nine times

Okay, what is a shared value?

“A shared value is a belief that both the brand and consumer have about a brand’s higher purpose or broad philosophy.”

Shared values have always been important to customers. The expectation and demand for these values continue to grow. Customers expect you to understand what matters most to them. Then, they expect you to use that data to capture their attention and improve their well being.

Most of us are addicts.

There are two types of customer relationships.

Constrained relationships use pain to keep us connected. Regret avoidance, loss aversion and a desire for control keep us locked in. Dedicated relationships rely on shared values, benevolence, integrity and competence. The intangible details motivate us to stay.

Look for the frightful five to embed themselves deeper with these cues.

Why is this important?

Organizations that are positioned well will benefit from these changes. Successful marketers will look to build on the growth of the big five, using their success to fuel their own.

What if this doesn’t happen?

It’s not a question of if it will happen, it’s a question of how fast. As we’ve seen, these changes are already happening. Customers are showing us what they want. Competitors are adapting rapidly. The AI/automation disruption has already started.

It’s not a question of when.

Yes, this is Bitcoin but it’s more than that. It’s a completely different way of processing information and Bitcoin is just the tip of the iceberg. In essences, blockchain is a different way to process transactions or records. Like a shared document that can be recorded and remembered several different ways. Blockchain is emerging in healthcare as well as financial tech. And no matter the fate of Bitcoin as a currency, blockchain will be here to stay. This is an excellent primer about how blockchain works and its underlying technology.

Whew… that does sound a little overwhelming but with a little preperation and an open mind, you too can be on the forefront of business trends in the New Year.